Music + Entertainment + Gaming in CLT And Beyond

In truth, this may not be a proper review since I’m still playing the game bit by bit, but having made my way mostly through the game, the best way to go into this write-up is to be in the moment, much like the thick, bouncy pink ball of black-hole that is our protagonist.

Kirby’s Return To Dreamland (or as it’s known in the UK, Kirby’s Adventure Wii) brings us back to humble beginnings, in which instead of jumping from planet to planet, we’re at home on Pop Star, enjoying the areas last seen in this manner in the NES classic.

A lot pops out at me from the first area; much of the background and starting stage are reminiscent of those first couple from Kirby’s Adventure, down to the enemies & weapon powers. This is enjoyable on many levels, but mostly because while i haven’t picked up a main title in the franchise for several years, the familiar setting relaxes and refreshes me for the transition from old to new.

The biggest thing about this entry to me are the momentary upgrades to the usual powers gained form enemies. They happen in little segments, always coming with a timed bar in order to not allow players to stay godlike, and are used mostly to thrash through one of the layouts in a fun way. For instance, World 4: White Wafers has a stage where Kirby takes on a Super-Powered ice form, enabling him to transform into a giant snowball and race through the stage. The stage in question was layered with giant bowling pins, which depending how fast players made it through a set of them, a prize ball would drop at the end, giving starts or food for health. The end part had the torso of a snowman, waiting for Snowball Kirby to complete it as the head. The creativity of that scene as well as the aesthetic is fun and enjoyable. 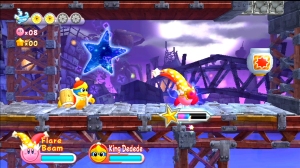 Another thing that stands out are the mini-boss battles, the Sphere Doomers. Their setup is the star-shaped black hole which Kirby’s powered-up forms rip open within the space. The timed stage before the initial fight reminds me of the last couple stages in Adventure, after the star wand was claimed and the Nightmare final battle was on the horizon. Again, I haven’t finished the game all the way yet, but I’m excited in wondering if the twist at the end has something to do with the NES game’s conclusion.

Other than that, collectibles have returned in the form of cogs strewn throughout the stages, which upon gaining them gives players access to mini-games, challenge levels, and museums holding various copy powers. With over half of them gained at this point, I’d say the difficulty in finding them is so-so, but the further on I’ve gone, the more I’ve had to back-track to grab one or two still missing in the recesses. That ticks up the challenge a bit, as well as making me observe my surroundings within the stage a bit more. Not a bad thing in admiring the soft beauty in the game’s environments.

I think what kept me from coming back to other entries was the ease of the difficulty, in terms of lives not mattering in Epic Yarn and in general many of the GBA & DS/3DS games just being something to blow through. I could honestly say the same about the Klonea remake on the Wii, but it occurs to me that as I’ve used Return To Dreamland as a break between other activities, that ease is what still brings the game home for me.

As a kid, Kirby’s Adventure was fairly difficult in some of the stages, especially in the Meta Knight and King Dedede worlds. That’s what I remember, and to this day Meta Knight’s sword-only fight still presents that challenge, if we’re talking seriously (lol). I think in all games, there should be an adjustment so players don’t breeze through, but the Kirby franchise doesn’t take itself too seriously, and I feel like I’ve missed that point.

With games in as vast of a selection as we have today, I can find a title that suits my desires for something more punishing, but Hal Laboratory’s pink protagonist is there, like many of Nintendo’s heroes, with something a little softer in mind. Sometimes, with as gritty and crushing life can be, in a world full now of Dark Souls & Ninja Gaiden’s, we could all use that fluffy, colorful world known as Dreamland to relax in and enjoy the ride, episode by episode.

Thank you for tuning into your world, for this… is 20XX.

4 DAYS TILL EASTWAY HOLIDAY AT @pubtommys!!!!
🎶 TONIGHT, IN THE CLT MUSIC SCENE 🎶
For the 2nd half on the month, RF20XX is going full HALLOWEEN for the Streams!
Recorded in front of a live-street audience (also in front of Petra's Bar), Aaron gives RF20XX a little insight into his work with My Blue Hope, his history in the Charlotte Music Scene, and what's to come in the rest of 2021 for the band.
🎶 7 DAYS TILL EASTWAY HOLIDAY 🎶
ON THE LATE EDITION OF THE RF20XX SUNDAY STREAM: